Tonka before getting shot and after. Photo Credit: Toronto Police Department

According to the Toronto Sun, “Someone shot and wounded a dog that was out for a walk with its owner, Toronto Police say. A woman was walking her dog, Tonka, an 11-month-old male American-English Bulldog, in the Dundas St. E.-Bayview Ave. area around 9:20 p.m. Saturday.

There were other people in the area as well, Const. Victor Kwong said Tuesday. The woman heard a “bang,” Kwong said. As people fled the scene, a person of interest was also seen running away, a police news release noted.

While the woman didn’t realize her pet was shot until later, the dog let out a yelp. “It was serious enough that (it) needed surgery,” Kwong said, adding it’s believed the dog will “pull through.” The person of interest is described as thin, black, has long braided hair and wore dark clothing and a baseball hat.

Meanwhile, residents of Cornwall St. told the Toronto Sun Tuesday evening the dog had been shot close to the base of the street, at the mouth of a laneway leading into a co-op of small townhouses.

Erin Metcalf, who lives there with her husband and three small kids, heard the shot Saturday night.  Her husband immediately went to check on the children.  She said that after the shot rang out, “it sounded like someone was screaming … It may have been the dog yelping (or the owner screaming), but it was sort of distorted.”

The shooting has Wence Bena, a resident of the area for a decade, worried for the safety of his family.  “Sometimes we go out, and my wife comes home from work late, and you just never know … Sometimes a bullet can go through a window and into a house.”

Resident Dwight Ferguson, who was out walking his two dogs — a German shepherd and a large beagle mix — said he heard a single loud pop and that police descended on the area soon after.  Barbara MacDougall, out with her Rottweiler, Mocha, expressed shock at the shooting of an animal. 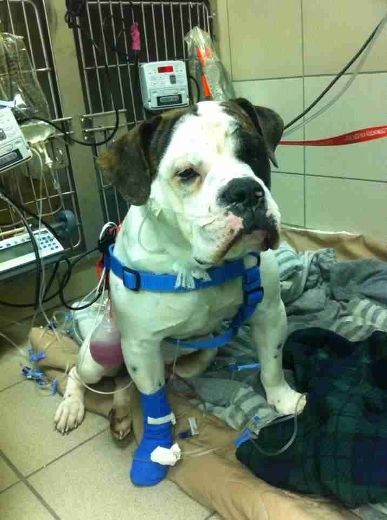